It was passed down in the hands of the nobles, and returned to the King of England and recovered. Now let’s talk about the story of this spinel named Black Prince Ruby.

The Black Prince Ruby is a spinel weighing 170ct. Legend has it that it was mined in Kuh-i-Lal (Badakhshan's famous Ruby Mine in Badakhshan) in Tajikistan. It first appeared in Ten Spain in the fourth century. At that time, Spain was composed of many small kings, and it was a region with many religions and frequent wars. The owner of the gems was originally the Muslim prince Muhammad of Granada. Later, Muhammad was deposed by his brother-in-law, Abu Said, and the gems fell into his hands.

In 1366, under the offensive of the Christian Iberian Peninsula conquest strategy, Said had no choice but to surrender to King Pedro of Seville and offered his property. In the end, he was executed by the king, and the gems arrived in Pedro. Luo's hand. In the same year, Pedro was usurped by his brother Henry. The unwilling Pedro fled to Bordeaux and made an alliance with Edward, known as the Black Prince. The price of the alliance was countless gold and silver treasures, including this spinel. The following year, the alliance was defeated. After Henry, the spinel was officially attributed to the black prince Edward.

It is presumed that Prince Edward brought the gem back to England, and the gem bears the name Black Prince Ruby, but it did not appear before the world again in 1415. During the Battle of Agincourt, King Henry V of England brought it He wore a helmet studded with black prince rubies and was smashed on his head by the French Duke with a battle axe. However, miraculously, although the helmet was damaged, both the spinel and Henry V survived, and Henry V finally won The war.

For the next 200 years, the records of gemstones were unclear until the Cromwell period, when they were sold to the people at a price of 4 pounds, but after Charles II was restored, gemstones returned to the embrace of the royal family. In 1838, as the coronation crown of Queen Victoria, the imperial crown studded with black prince rubies became one of the sovereign symbols of the British royal family. Today, Queen Elizabeth II has undergone several adjustments during the period, and its appearance is similar to that of the Victorian era. Similar, the black prince ruby ​​has been set in the center of the crown.

After more than 600 years of ups and downs, the historical and political significance of the black prince ruby ​​has far exceeded the value of the gem itself, and it has become one of the world's famous gems. 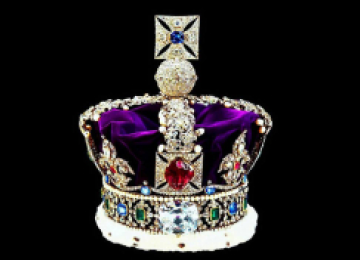